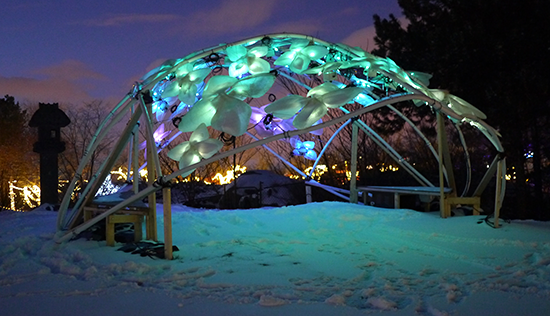 Architectonic Media Interventions (AMI) is a fundamental research project that lies at the intersection of computational art and architecture. This project provides a unique vantage point for exploring questions of how the digital is influencing the built environment. Through this project technical methods are used to facilitate artistic expression and to explore the impact that ubiquitous digital technology has on the built environment and our everyday lives in a social and experiential manner.

The use of the term ‘architectonic’ refers to objects that contain architectural qualities, such as scale and function, and relate to the viewer as a whole or part of a built environment. Experimentation in this research area focuses on building media-centric architectural components in existing built environments. These components take on many forms, ranging from furniture scale objects, to integrated building components, to building scale, such as a pavilion or intervention. The AMI research critically engages the role of rising technologies in order to gain a deeper understanding of how technology and the built environment have merged in the past, are continuing to merge in the present, and what impacts on society, industry, individuals and the environment this integration will have in the future.

1) Research-Creation Projects: The work of the AMI will result in installations of architectonic scale, sculptural objects that transform the physical and digital condition of an existing built environment. It is the aim of these projects to stimulate critical discourse on the impact and meaning of integrating digital systems and embedded technology into the built environment. The AMI installations have been exhibited at venues such as museums, universities, public spaces, conferences, and art festivals.

2) Hardware Development: In conjunction with projects, new hardware solutions will be developed to address the current challenge of how to deploy large networks of micro-controllers in the built environment in order to facilitate the physical implementation of actuators, outputs, and sensor networks in the AMI. The results have been published in academic journals, conference papers, and will be made publicly available through Creative Commons licensing. (For more information see the nD::Node)

3) Software Development: New software solutions will be developed to address the current challenge of how to design behavioural software frameworks for nonlinear interactive systems, which are necessary for the behavioural logic of the AMI. The results have been published in academic journals, conference papers, and will be made publicly available through Creative Commons licensing. (For more information see the WorldMaker Universe)

4) New Design Workflow Strategies and Techniques: The development of new design workflow strategies that help streamline the process of working with a worldwide collaborative design team, linked digitally, and providing linkages between various platforms and software to facilitate completely digital (file-to-factory) design methods. The results have been published in academic journals and conference papers, and disseminated through lectures and workshops.

Context in the History of My Own Work

As an artist and researcher in the field of computational art, I have developed a unique connection to architecture. Each AMI project is an expressive, artistic endeavour that provides a testing ground for the aggregation of methods that help dissolve current barriers to digital integration and embedded technology in the fields of computational art and architecture. The following is a survey of projects that I have realized as solo works and in collaboration with architects that serve as a firm basis for the development of the AMI research project: 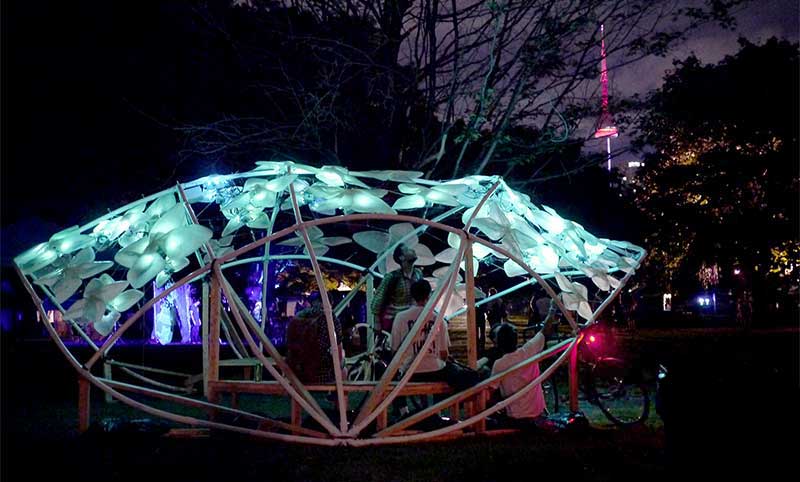 homunculus.nimbus (2018-2019) is the third iteration of a previous work called, homunculus.agora, which was exhibited at Land|Slide Possible Futures, Markham Museum September 21st- October 14th 2013; and Farm To Table Exhibition, Markham Museum January 31st –August 17th, 2014. Commonly they are installations made of several sculptural bodies (homunculi) that are organized in a fluid-like cluster. In homunculus nimbus the homunculi are used to cover a 23 foot diameter, shell-like pavilion pavilion that acts as a habitat for the homunculi. homunculus nimbus is intended to be both an alien and familiar, a projection of a future where synthetic life-forms may be commonplace. The exhibit simulates the life-like resting and wake cycles in nocturnal beings by providing quiet and shade in the day, and light that responds to the sounds and activities of the festival at night. When awake the sculptural pieces exhibit a continuous flow of light patterns in response to each other, visitors in the pavilion, and the environment around them. 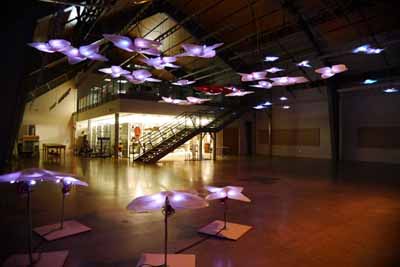 homunculus.agora (2013-2014, Hosale) is a large-scale architectonic installation of several dozen sculptural bodies (homunculi) that are organized in a fluid-like cluster. The homunculi are implanted with electronic circuits that give them the ability to express behavioural qualities through light and sound events. A selection of the homunculi are touch-sensitive and are positioned to invite people to touch the work. An offshoot of this project is homunculus alpha, a single homunculus that is installed as a stand-alone, touch-sensitive object to be taken to festivals and smaller events. The homunculi were built as part of a file-to-factory digital fabrication process that involved generative modelling, CNC milling, and casting of a fibre-composite exoskeleton in the York Digital Sculpture Lab and nD::StudioLab. homunculus agora is currently on exhibit at the Markham Museum, Markham Ontario until Summer 2014. The extended duration of this exhibition will serve as a research opportunity to test and refine the behavioural, hardware, and software solutions that would be employed in the AMI projects.

The Quasar Series (2008- 2013, Crettaz, Hosale) , which included Quasar, Quasar 2: Star Incubator, and Quasar 3 [danger du zero], was an iteration of immersive interactive light and sound installations that explore the world that exists beyond our senses by converging light and sound events in a tangible architectonic sculptural object that lies in the intersection between computational art and architecture. Made from prototype membranes and comprising a dense array of interlinked elements describing an intricate three-dimensional structure fitted with sensors that simultaneously draw information from real-time stellar occurrences and visitors of the exhibition. This information is then fed back into the object through layers of LED strands, re-visualizing the space in order to create an interactive spatial experience that connects the viewer with the systems of the Universe that unfold beyond our senses. Versions of the Quasar series were exhibited at SciArc, Los Angeles (2007), Nuit Blanche, Toronto (2012), Art Souterrain, Montreal (2013), and Wisconsin Institutes for Discovery, Madison, Wisconsin (2013).

InteractiveWall: Prototype For An Emotive Wall (2009, Oosterhuis, Hosale, Kievid, Laszlo, Siemerink, FESTO, Bukhardt-Leitner constructiv, comissioned by FESTO) is a dynamic structure composed of seven separate wall components that display real time behaviour. The components bend themselves back and forth, displaying patterns of light on the wall’s “skin,” and projecting localized sound in response to the presence of a participant. As architecture becomes emotive, responsive, and interactive, participants can influence its behaviour. In that sense architecture follows a general development in society towards participation, personalization and customization, which follows the evolution of contemporary mundane technologies. It is through projects such as the InteractiveWall that we can explore the possibilities of emotive architecture.The InteractiveWall was exhibited at the Hannover Messe, Germany (2009). 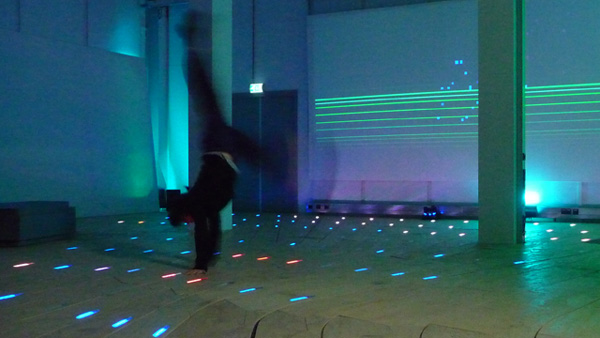 Designed as an open system, protoDECK (2009-2011) is an interactive floor in Hyperbody’s Research Lab, called protoSPACE 3.0, at the Technical University of Delft, The Netherlands. Designed by Marco Verde, with the embedded electronics and interaction design by myself, protoDECK is both physically and behaviourally a modular system developed to embody multi-modal interaction. The design of protoDECK rises from the integral application of computationally advanced design techniques and digital fabrication methods. Within each one of the tiles is a small, embedded microprocessor, called protoNODE. Each protoNODE is networked with its neighbours and is designed to give a tile a local intelligence whereby it parses and interprets force sensor data from footsteps and controls the output of a full-colour led lighting system. Each tile is therefore a member of a larger interactive system, which can be programmed with various behaviours to support numerous interaction scenarios.

n-D::StudioLab
York University • School of the Arts, Media, Performance, and Design • Toronto, Canada
this site and its contents © 2022 Mark-David Hosale