The IceCube Laboratory at the Amundsen-Scott South Pole Station, in Antarctica, hosts the computers that collect raw data from the sensors buried in the ice below. Image: S. Lidstrom/NSF

IceCube is a particle detector at the South Pole that records the interactions of a nearly massless subatomic particle called the neutrino. IceCube searches for neutrinos from the most violent astrophysical sources: events like exploding stars, gamma-ray bursts, and cataclysmic phenomena involving black holes and neutron stars. IceCube is also a powerful tool to search for dark matter and could reveal the physical processes associated with the enigmatic origin of the highest energy particles in nature. The background neutrinos produced by cosmic ray interactions in the atmosphere are used to study the properties of the neutrinos themselves; their energies far exceed those produced by accelerator beams. IceCube is the world’s largest neutrino detector, encompassing a cubic kilometer of ice (source: http://icecube.wisc.edu/). 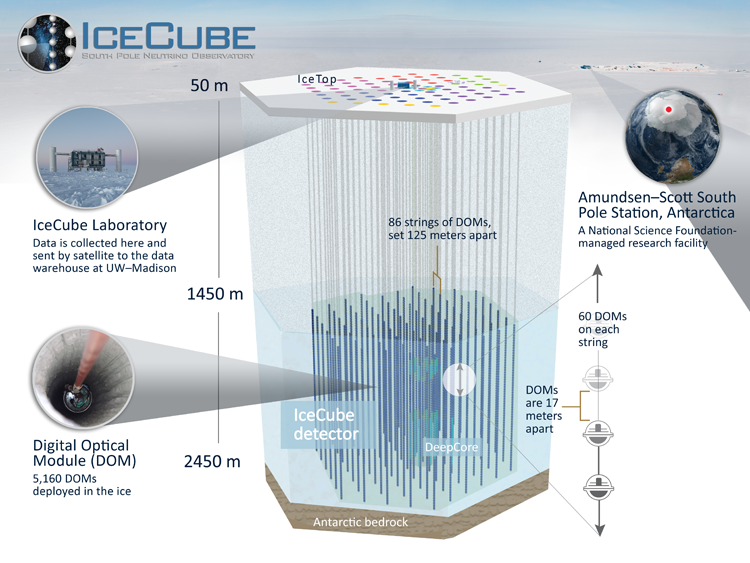 My collaboration with IceCube began with the development of Quasar 2.0::StarIncubator, which appeared in Toronto's Nuit Blanche in 2012. During the development of this work there was a desire to connect the work with events that happened in the deep reaches of our Universe. The idea of collecting cosmic ray data in large part originated because we used a device known as a muon detector in the first Quasar as an instrument for interacting with the work. We sought to repeat a similar experience in Quasar 2.0. This prompted me to contact the Wisconsin IceCube Particle Astrophysics Center (WIPAC), where I was connected to IceCube associate director Jim Madsen, who leads the education and outreach efforts.   Madsen provided us with data collected from the top of the IceCube detector, air showers produced from cosmic ray interactions. archived data from IceCube were used to stimulate and interrupt the behaviour of Quasar 2.0 as one of the many layers of information that drove the work .

From there the collaboration between Mark-David Hosale and Jim Madsen continued and expanded. In October 2013 Hosale and Madsen worked with Prof. Elisa Resconi of TU München to organize a panel discussion on ArtScience: exploring new worlds, realizing the imagined at the Deutches Meuseum in Munich, Germany. In addition, Hosale and Madsen began to work on several projects starting with the IceCube Display (and its variants), the sonification of IceCube data, and the Neutrino World.

This is an ongoing collaboration which has taken many forms, and will continue to do so in the foreseable future.

n-D::StudioLab
York University • School of the Arts, Media, Performance, and Design • Toronto, Canada
this site and its contents © 2020 Mark-David Hosale